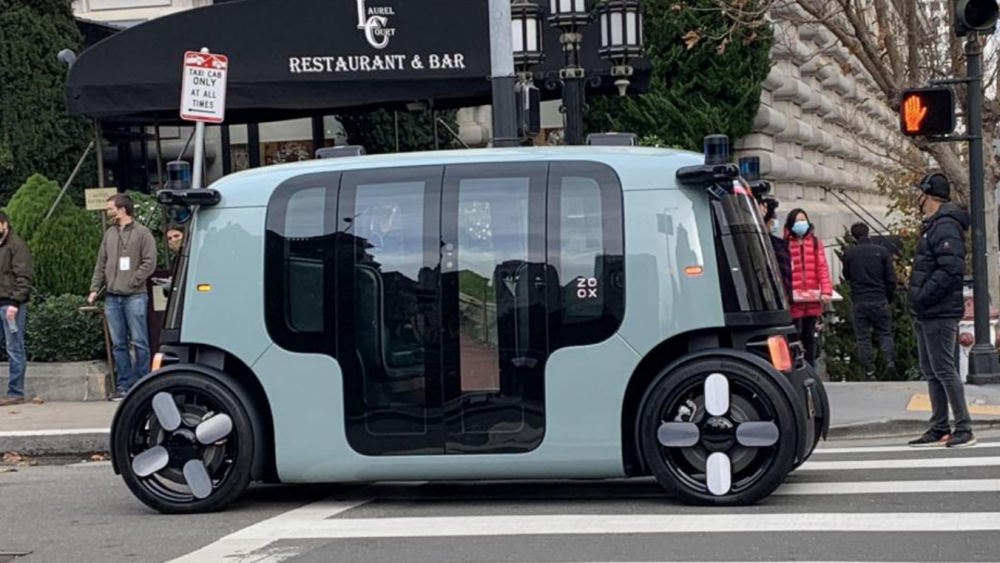 Zoox, the self-driving robotaxi startup acquired for over $1B earlier this year by Amazon has promised a big reveal for Dec 14, but their vehicle was spotted today on a San Francisco street doing a photo shoot.

Zoox’s mission, from day one, was to design a custom vehicle from the ground up to be a robotaxi and only a robotaxi, forgetting all conventional wisdom about cars. Teams like Waymo have instead modified existing vehicles for their first deployments. GM/Cruise also began with modified Bolts but later displayed a vehicle with superficial similarity to the Zoox, and Zoox of course has been doing all their on-road testing in modified standard vehicles while developing this vehicle in parallel.

In the past, Zoox has hinted at design goals for this vehicle. As predicted it is symmetrical, and has no front or rear. It is intended to be able to go in both directions equally well. Some hints from the company say the 4 wheels can also be steered independently, allowing it to be highly maneuverable, possibly able to turn in place as well. The original design called for total 4-way symmetry, with one motor for each wheel and complete redundancy. Sources suggest this has been scaled back a bit.

This basic robotaxi shuttle design, from the outside, is very similar to others from Cruise, Easymile and many others, with sliding doors in the center of a rounded boxy shape, and face to face seating. There’s only such variation possible there. Notable about this vehicle are the 8 LIDARs located at the corners, one horizontal and one tilted down. Unlike most other vehicles they are on mounts sticking out of the car, giving them a slightly better view and the ability to even see the sides of the vehicle itself with no blind spots, useful in close quarter work and scanning nearby pedestrians and passengers. (The Cruise Origin also has the LIDARS extending out from the vehicle.)

Last year, I asked Jesse Levinson, co-founder and CTO of Zoox about some of the reasons he wanted to take on the hard task of making a custom vehicle. While there are several factors, one he outlined was indeed the ability to have complete control of sensor placement. Tim Kentley-Klay, the ousted other co-founder, particularly valued the symmetric design for ease of manufacturing and for rider convenience. Such a vehicle never “backs up” because it has no forward or backward direction. As such, it can pick up customers and immediately take them away without needing to turn around. It remains to be seen if that’s a killer feature or a nice-to-have. (Vehicles can also usually do their backing up before they pick you up, since robots don’t really care much about the hassles of turning around.)

The design is not tall enough to stand up in, but at the same time is not tremendously aerodynamic. Most electric vehicles that will travel at high speed work very hard to have an aerodynamic form — it’s the only way they can get good range. This suggests this vehicle is an urban one, not meant to do long trips on the highway. Another design (like the very early one above) might be more suitable for long trips. (The nice thing about robotaxis is you can tailor the vehicle to the trip.) Not going on the highway at all can eliminate the need for long-range LIDAR, though there are two boxes on the top of the vehicle which might be such a LIDAR — the picture does not have enough detail. The vehicle will almost certainly also have radars (front and back, of course.)