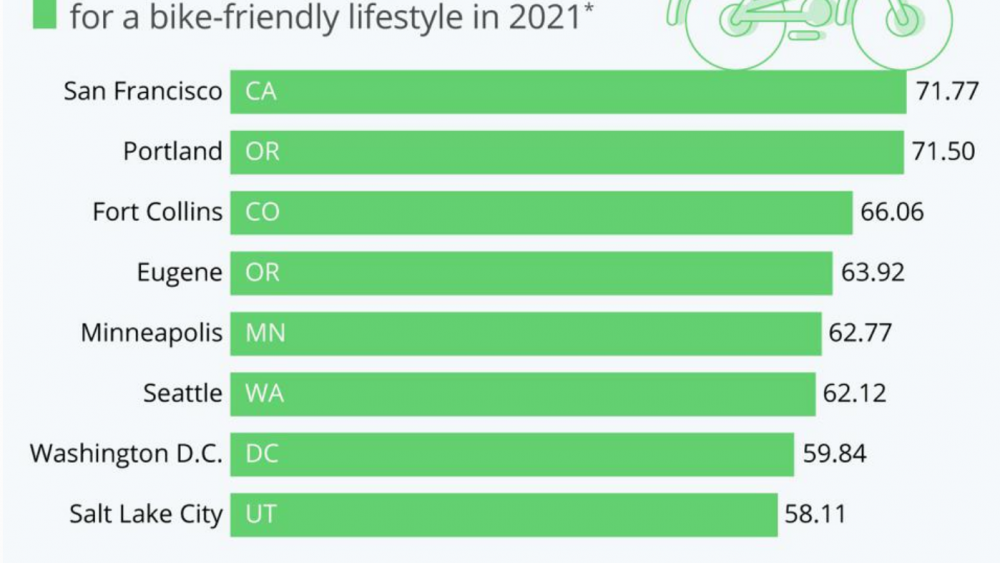 Cycling has enjoyed huge gains in popularity across the United States and much of the world as a result of the pandemic, even leading to serious bicycle shortages. As millions of Americans went out and grabbed a bike as the country locked down last year, the area where they lived likely determined how much they enjoyed their new hobby. That’s according to LawnStarter who ranked 200 major U.S. cities on bike-friendliness in early June on 18 metrics across 4 categories: climate, bike routes, bike shops/clubs and safety.

Cities were scored between 0 and 100 (100 being the highest possible score) with factors such as the length of bike lanes, the availability of bike-sharing programs and access to repair shops counting in a location’s favor. Despite its challenging hilly terrain, San Francisco was named America’s most bicycle-friendly city in 2021, largely thanks to its extensive cycling community and favorable climate. It was followed by Portland, Oregon and Fort Collins, Colorado with the latter scoring well due to both its community and its high share of commuters who bike to work.

With Eugene, Oregon and Seattle, Washington, also among the top-10, the Pacific Northwest did particularly well in the ranking and LawnStarter notes that the region sets itself apart when it comes to safety in particular. While some cities’ investments in bike infrastructure were reflected in the ranking, such as Washington D.C., wet weather climates that dissuade people from cycling kept many more from reaching their full potential.

The situation was similar in the south of the country which tended to score poorly, primarily on climate grounds with a mix of extremely hot days mixed with heavy annual rainfall combining to make cycling more difficult. Baton Rouge, Louisiana, Jackson, Mississippi and Newport News. Virginia were ranked the least bicycle friendly cities in the country.