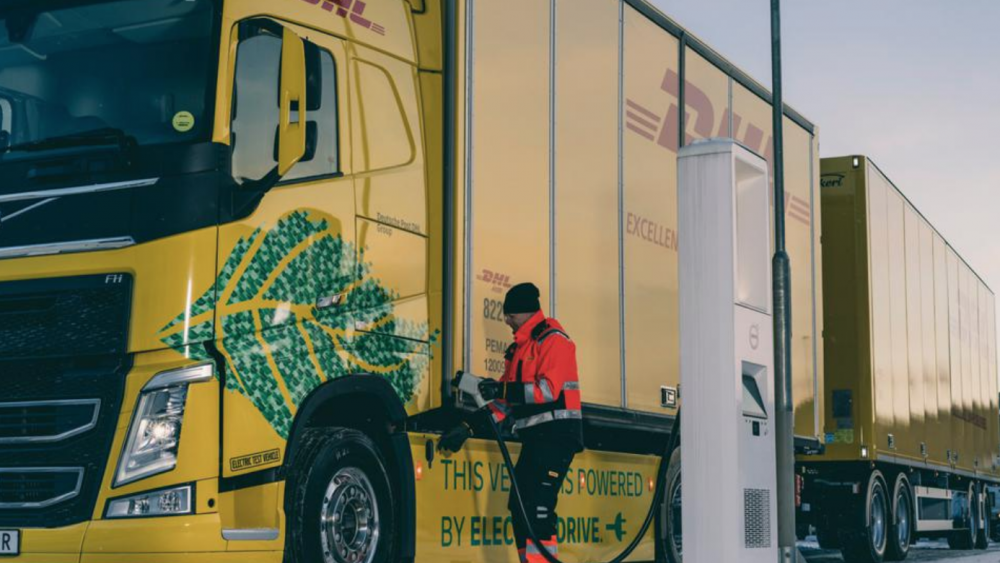 Batteries Or Hydrogen For Big (Clean) Trucks? Volvo Group Bets On Both

The push to electrify transportation includes big developments for heavy-duty vehicles, with an expanding range of zero-emission trucks, buses and service vehicles. And while Tesla sets the standard for electric passenger cars, CEO Elon Musk’s view that batteries are also the best option for commercial models holds less traction for top producers like the Volvo Group. It’s readying battery-electric models–but is also upbeat on a clean fuel Musk has knocked for years: hydrogen.

European truckmakers are under particular pressure from the EU to get off fossil fuels and eliminate carbon emissions from their vehicles in the decades to come to meet targets under the Paris Agreement. For Swedish truckmaker Volvo (separate from the Volvo Cars), that means most of its products need to be electric by 2040, says Chief Technology Officer Lars Stenqvist.

“I am convinced that such a big player as the Volvo Group will certainly need both technologies. We will need both as they serve different purposes,” he tells Forbes. “We will have hydrogen fuel cell electric vehicles on the market during the second half of this decade, somewhere between 2026 and 2030.”

Declining lithium-ion battery costs and the improved safety and durability of battery packs in recent years is giving automakers such as GM, Volkswagen and Ford confidence they can profitably sell electric cars in the years to come. (Tesla has moved into the black in the past year, but its sales of emissions credits to other automakers, free money worth $1.58 billion in 2020, remain crucial to its quarterly profits.) Even Toyota, Honda and Hyundai, which prioritized hydrogen and sell fuel cell models to drivers in California, Japan, South Korea and Germany, are ramping up battery-powered offerings as that option gains increased consumer acceptance. The heavy-duty vehicle market may unfold differently.

In a related development, Daimler Truck and the Volvo Group on Tuesday completed the formation of “cellcentric,” their fuel-cell joint venture announced in 2020. As part of the deal, Volvo Group bought a 50% stake in the previous Daimler Truck Fuel Cell GmbH & Co. for about €600 million ($725 million). The new company will develop, produce and commercialize fuel-cell systems for use in heavy-duty vehicles.

Volvo’s view, like that of manufacturers including technology partner Daimler and Nikola Motors, is that batteries are well-suited for shorter-range applications and for fleet vehicles and buses, which regularly return to fixed fueling depots.

Nikola, a would-be Volvo rival, underscored that point last month by announcing its Nikola Two fuel cell semi will have a range of up to 900 miles per fueling when it goes on sale in 2024. CEO Mark Russell thinks a range of up to 1,000 miles is possible. That’s double the 500 miles Musk has is targeting with the Tesla Semi, which may go on sale this year or next.

Fuel-cell and battery-powered vehicles are both electric, sharing the same motors and many other components. The key difference is batteries store electricity and fuel cells make it onboard as needed, in an electrochemical process that extracts electrons from hydrogen forced through fuel-cell membranes. Aside from the electricity, the only byproduct is water vapor. Beyond cars and trucks, they’ve been used by NASA for decades, they work as stationary electricity generators and are being developed to power trains and even ships and ferries.

Though Musk uses hydrogen for his SpaceX rockets, for years he’s referred to hydrogen as “fool cells.” On Tesla’s earnings call in January, he again trashed hydrogen as “just crazy,” bemoaning its low energy density as a transportation fuel. “You need a gigantic fuel tank volumetrically and it’s got to be very high pressure. It’s a big pain in the ass,” he told analysts. “We’re extremely confident that we can do long-range trunking with batteries.”

Knocks on hydrogen have been that it’s primarily sourced from natural gas, meaning that while it’s a zero-emission fuel when powering a vehicle making it creates carbon emissions (though less than from the use of diesel, gasoline or natural gas). The other problem is it’s more efficient to charge up batteries with electricity than to use that electricity to make hydrogen, which in turn is reverted into electric power for propulsion.

Yet as ever greater amounts of electricity become available from large-scale wind and solar projects, the ability to make “green” hydrogen from water and renewable power eliminates the fuel’s carbon penalty (and the energy inputs are free). Relatively little hydrogen made in that way is currently available, though Norway’s Nel Hydrogen intends to produce low-cost hydrogen from renewable sources at large scale by 2025 at a cost of just $1.50 per kilogram, well below current fossil fuel prices.

Startup Nikola secured a contract for low-cost renewable power with the Arizona Public Services Company in December 2020 that the company says will allow it to make hydrogen at a cost price parity with diesel fuel, at about $3 per kilogram or less.

Combustion engines will still be around for some time, but increasingly will rely on biofuels, renewable fuels or even combustion of liquid hydrogen, according to Stenqvist. “So I have three technologies in parallel that we focus a lot on: it’s combustion now, and for the future it’s battery electric vehicles and fuel cell electric vehicles.”

Trying to make sense of technology-driven changes reshaping how we get around from Los Angeles, America’s sunny capital of congestion. Find me on Twitter at @alanohnsman