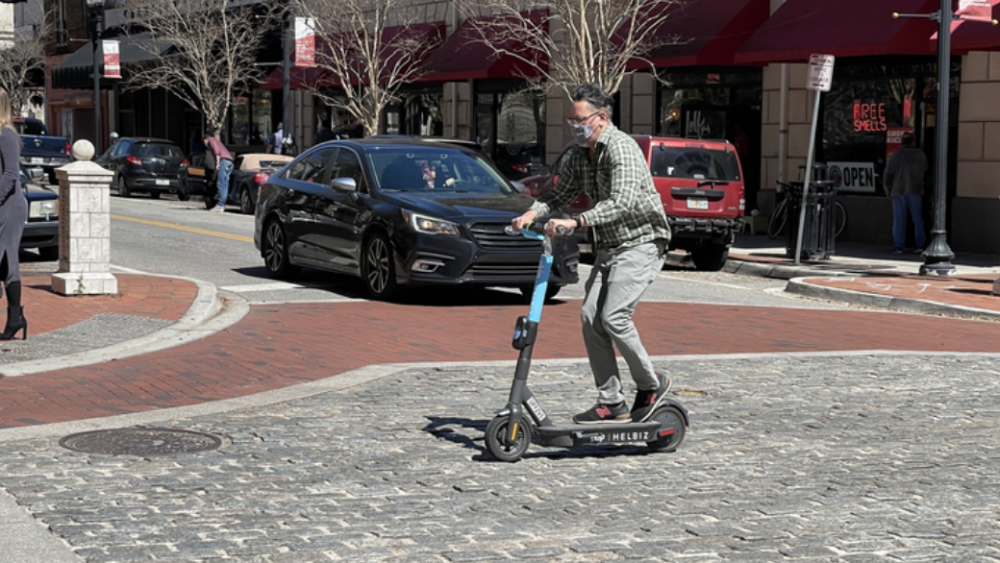 Officials said riders can rent and drop off the electric transportation options from four companies at 35 locations on the Northbank.

According to a news release March 4 from the Downtown Investment Authority, riders can rent and drop off the e-scooters 24 hours per day at 35 designated sidewalk corrals throughout the Downtown Northbank.

In the news release, the city said it has contracted with micromobility technology companies Blue Duck in San Antonio; SPIN in San Francisco; LINK of Cambridge, Massachusetts; and Helbiz Inc. of New York City.

DIA Redevelopment Coordinator Lori Radcliffe-Meyers said March 4 that riders can unlock the e-scooters by scanning a QR Code through each company’s smartphone app.

She said all scooters cost $1 to unlock and the rates vary depending on the e-scooter provider.

City Council approved the pilot program framework in February 2020 that allows the e-bicycle and e-scooter operators to set the rental rates.

Ordinance 2020-0026-E allows for e-bicycles, but Radcliffe-Meyers said the initial vendors are offering only e-scooters for now.

The e-scooters and e-bicycles are equipped with a battery that powers an electric motor. Companies use geofencing, a form of GPS tracking technology, to detect when the bike or scooter leaves the Downtown dockless mobility boundaries.

Radcliffe-Meyers said the DIA will monitor demand and could add more drop-off and pickup corrals.

“If we start seeing the riders would like to have corral locations somewhere else, we can definitely add more,” she said.

The corrals where the e-scooters and e-bicycles park have to be installed on sidewalks that are 8 feet wide or greater, according to the program parameters.

For a high-resolution PDF of the scooter map, click here

The ordinance allows the corrals in other areas with some restrictions.

Planning and Development Department staff selected the e-scooter companies over the past 12 months through an application and permitting process outlined in the Council legislation.

Rentals of dockless e-bicycles and e-scooters for short point-to-point trips in Downtown areas have been growing in popularity in Florida and the U.S.

Council member LeAnna Cumber, who drafted the bill with assistance from the DIA and the JTA, said in February 2020 that Jacksonville was the last of Florida’s major cities to try a dockless e-bicycle and e-scooter program.

Cumber and city officials hope the program boundaries can expand to include other areas of Downtown and neighborhoods like San Marco, Riverside and Brooklyn.