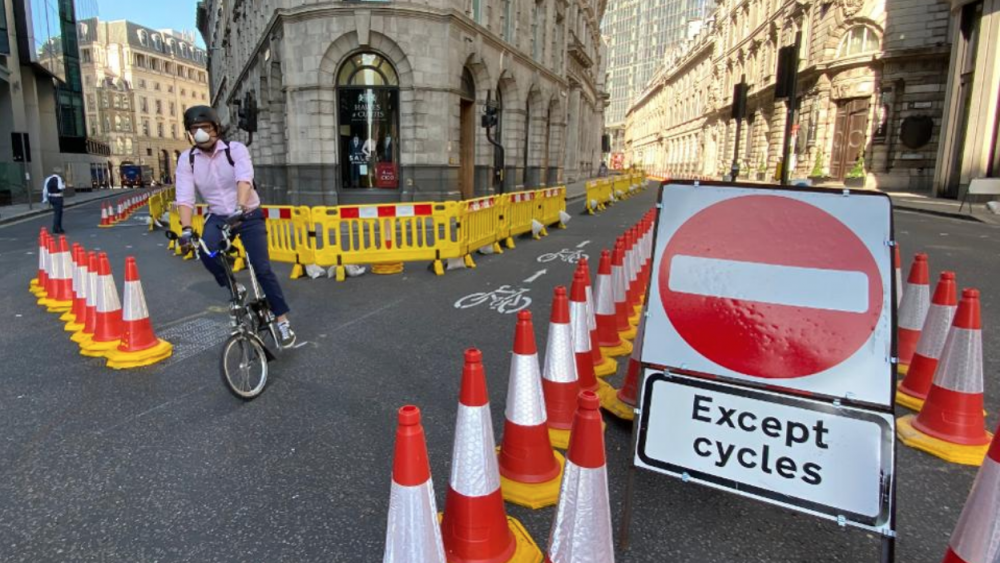 The City of London Corporation—which administers London’s financial district—is moving at pace to make the Square Mile more people friendly. In addition to a growing number of pop-up cycleways and widened sidewalks installed during the first phase of the Corporation’s pandemic transport plan there will be further measures to discourage motor vehicle use, including replacing car parking bays with corrals for securing bicycles.

“We have dedicated generous space for City workers, residents and visitors to move around on foot and by bike both safely and comfortably while also enriching our public realm for use during these unusual times,” says Alastair Moss, chair of Corporation’s transportation committee.

Described as a “transport recovery” initiative, the new steps are “primarily based on walking, cycling and the managed use of public transport,” says a Corporation statement.

More seating and greenery will be added to improve streets, with the changes billed as temporary but, if they prove popular, they could be made permanent.

1,900 cycle parking spaces will be installed in the place of car parking bays. Seven kilometres of streets will be made more people friendly in the next phase of the works, including the “reallocation of highway to pedestrians and cyclists on Fleet Street and Moorgate, timed closure of Moorfields to motor vehicles and the closure of Chancery Lane to through traffic,” says the Corporation.

This will add to the space taken from motor vehicles on Threadneedle Street, Old Broad Street and Cannon Street; and the introduction of timed closures and changes on Coleman Street, Lombard Street and St Mary Axe.

Walking and cycling were increasing in the Square Mile even before the lockdown, starting on March 23. According to Corporation monitoring 90% of all journeys made on the City’s streets are partially or entirely walked.

Cycling in the Square Mile has increased by 292% since 1999, while the number of motor vehicles using the City’s streets has halved in the last 20 years.

Prior to the pandemic the Corporation had stated it would impose a 15mph speed limit in the City.