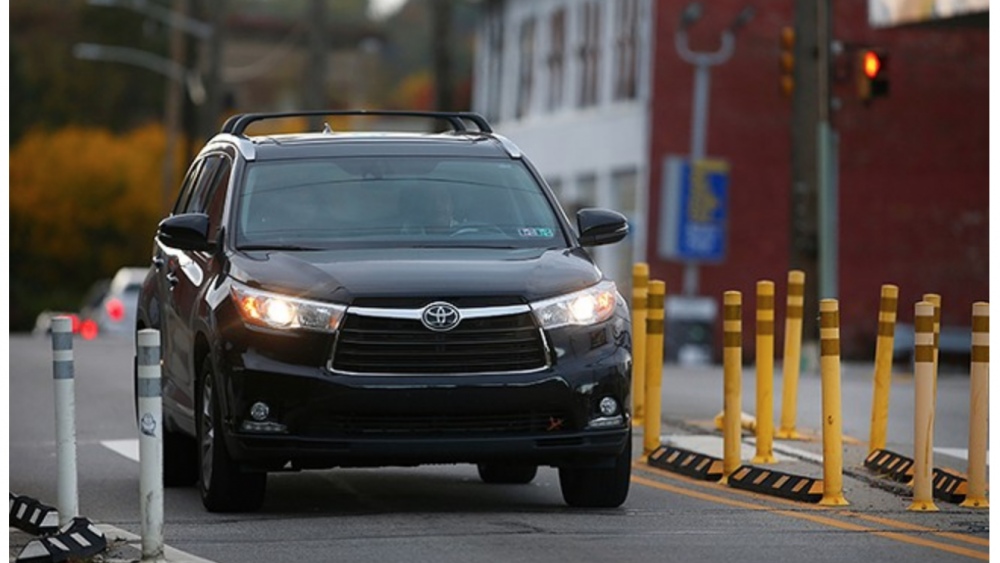 Why Pittsburgh is redesigning streets to help drivers slow down

Soraya Bey lives in Pittsburgh’s Carrick neighborhood on Maytide Street. According to her social media page and an “Expedite Traffic Calming on Maytide Street” online petition she started, she has had two cars crashed into and totaled since June, even though those cars were parked off the street. Three road deaths have occurred on Maytide since 2001, according to Bey. Maytide Street connects the well-traveled thoroughfares of Sawmill Run Boulevard and Brownsville Road.

Bey and other Carrick community members have proposals to mitigate the traffic problems on Maytide. They are asking to add stop signs, put up plastic bollards to help protect pedestrians, add more yield signs, and several other measures. So far, Bey is still waiting on the city and city council to take on some of these proposals, and odds are they will, but it might just take some time.

Pittsburgh city officials, particularly the city’s Department of Mobility and Infrastructure, have been very busy the last couple of years working on efforts to make dozens of streets, intersections, and corridors in the city safer for drivers, pedestrians, cyclists, and transit users. And those efforts have really sped up as of late with several newly reconfigured stop lights installed, bike lanes added, and traffic-calming devices that all basically share the same goal: slow down drivers.

For a nation obsessed with driving, car culture, and convenience, this may seem counterproductive. Why would slowing down traffic be good? Well, slowing vehicles down means less road deaths, less property damage, and a better environment for small businesses, parks, schools, and other urban amenities. Even shallow observations of cities like Amsterdam, Barcelona, and Paris show how improved city life can be with fewer cars and slower vehicles.

And remember that Pittsburgh has been called the Paris of Appalachia; it’s actually a good fit for these traffic-calming changes. While the majority of Pittsburgh’s trips are still taken using personal vehicles, more than 10% of the city’s residents walk to work, a disproportionately high amount for a mid-size city like Pittsburgh. Bike ridership rates have also increased each of the last several years. The city’s narrow streets and lack of alternate routes mean fewer chances to zoom through residential areas. 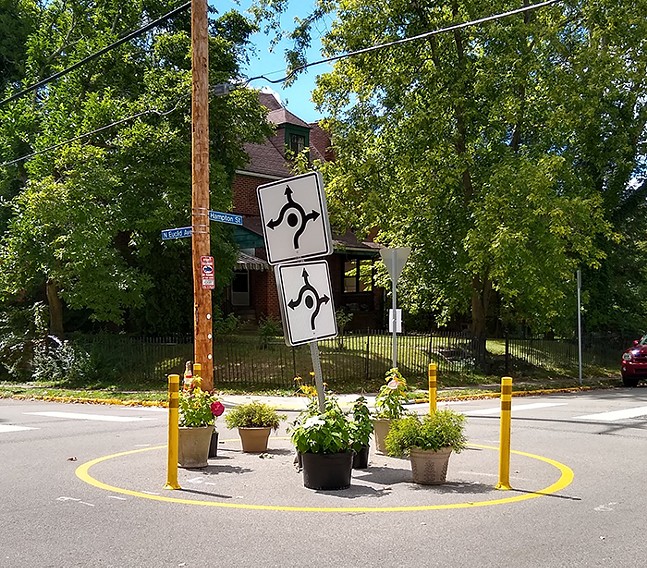 CP Photo: Abbie Adams
A traffic-circle in Highland Park meant to slow drivers down and make the street safer for bikers and pedestrians

Pittsburgh Mayor Bill Peduto said it was his goal when his administration created the Department of Mobility and Infrastructure (DOMI) to make transportation around Pittsburgh safer and more equitable for all road users, not just drivers.

“We recognize that our streets and sidewalks are used by many different users, and our rights-of-way can and should be more efficient and more safe,” says Peduto.

DOMI director Karina Ricks was hired in 2017, shortly after the new department was created. Before Pittsburgh, Ricks worked as the associate director at the transportation department of Washington, D.C., which has also been adding traffic-calming measures and expanding its bike network over the years. Ricks acknowledges Pittsburgh’s traffic-calming changes are a first for the city, but says they are necessary to improve safety. Ricks says the difference between a pedestrian being struck by a driver moving at 25 mph is a 70% survival rate compared to just a 30% survival rate when a pedestrian is struck by a driver traveling 35 mph.

“When I came here and there wasn’t a traffic-calming program, and we know that 95% of crashes are human error, but also 80% of fatalities are speed related,” says Ricks. “It is absolutely critical that we recognize that speed kills. Our goal is not zero crashes, that would be nice, but impractical. But our goal is zero deaths.”

One of the strategies Pittsburgh has used so far include implementing new traffic lights so that drivers turning left are made to wait until after pedestrians cross the street. That might mean a few seconds longer wait for drivers, but it’s a huge safety improvement for pedestrians.

And that is really the crux of what design changes mean for Pittsburgh drivers: slowing down and being more attentive to surroundings. Ricks notes that the farthest city residents will have to drive to get Downtown is about six miles. If a driver is speeding, that journey might take about 20 minutes on city streets. If a driver is not speeding, that journey takes about 21-22 minutes.

“Ninety seconds. How can we square that with the potential of taking someone’s life?” says Ricks of the potential of hitting a pedestrian or cyclist while speeding. “You are maybe saving two minutes.” 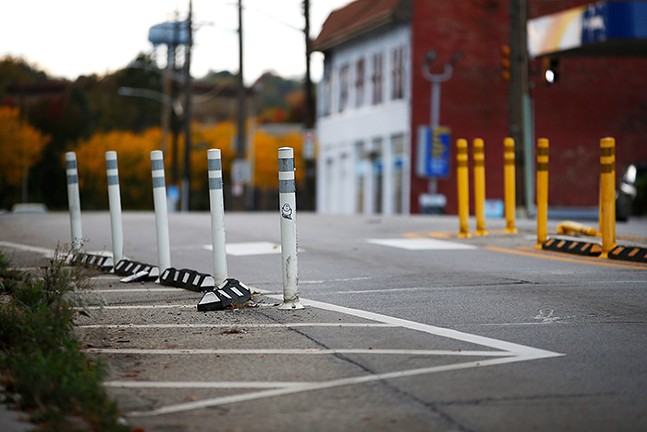 According to a study from Pennsylvania law firm Dallas W. Hartman, Allegheny County had an outsize share of vehicle crashes from 2014-2016 when accounting its population. Many of those crashes happen at intersections in the city, with large concentrations near the West End Bridge, near Deutschtown in the North Side, along Saw Mill Run Boulevard in the South Hills, East Carson Street in the South Side, Fifth Avenue in the East End, and Downtown. And from 2017-2018, traffic fatalities increased in Allegheny County, even as national averages were decreasing. Pittsburgh overall is about on par with national averages for crashes and traffic fatality, but Ricks says the city can become a leader on the issue.

DOMI has also been redesigning streets to help drivers slow down. That can mean speed humps, like on Beechwood Boulevard in Squirrel Hill and some other side streets, but those aren’t always great for ambulances and buses. So, DOMI has also been installing devices to slow drivers down. These can be curb bump outs, or even just reflective plastic bollards near intersections like Penn Avenue in the Strip District. DOMI has also started to install mini traffic circles in residential areas like in Highland Park. Trees spaced close together with canopies can also slow traffic down. Really anything that makes drivers feel a bit constrained, and thus more attentive.

“Gorgeous tree canopies have the same effect as tunnels,” says Ricks. “And tree trunks close together also help people keep their speed down.”

Ricks acknowledges Pittsburgh traffic-calming can’t be a one-size-fits-all approach. The city has too many streets that serve as the only route between neighborhoods. And many of those are relatively narrow, meaning widening sidewalks or adding bike lanes is difficult to accomplish. So, DOMI has had to get creative by creating Neighborways.

This is when side streets and even alleys are converted into safe and convenient routes for cyclists and pedestrians, to help them avoid the well-trafficked thoroughfares. Neighborways have popped up in South Side, and are proposed for Point Breeze and Bloomfield/Friendship. They basically improve street conditions and signage on seldom-used roads, as well as replace four-way stop signs with mini-traffic circles.

Another thing that Ricks is suggesting Pittsburghers do now is stop parking their vehicles on the sidewalk, which is popular in neighborhoods like Mount Washington. She says this is counterproductive by giving drivers wider streets to travel, which encourages speeding, in turn causing more drivers to crash into parked cars. It also blocks pedestrians from having safe passage.

Ricks says narrow streets are good, as it slows drivers down and causes them to be more attentive to other road users.

As for the future of traffic calming, Ricks says to expect more of the same. DOMI has the ability to install speed cameras and city-managed routes, which is something Ricks is interested in since it eliminates any human interaction to traffic enforcement (which disproportionately affects people of color), but says automated speed and traffic cameras won’t be used on streets that are designed to encourage speeding above posted speed limits, like the downhill portion of Shady Avenue.

“I am an ardent believer in self-enforcing design,” says Ricks. “If we design a street where all the environmental cues are telling you that you should be traveling at 45, and the posted speed limit is 25, that is entrapment. That is not fair.”

And Pittsburghers are embracing the city’s traffic-calming push. So much so, DOMI can’t keep up with requests from residents. 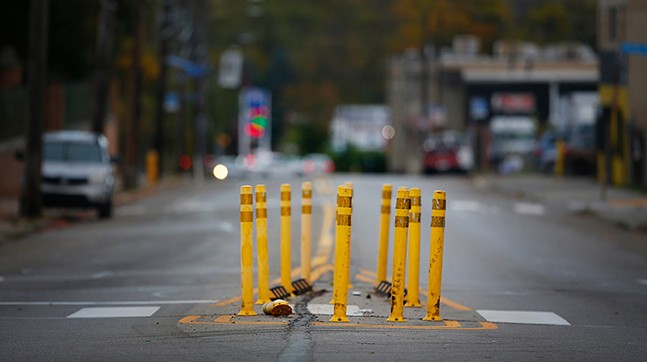 A city traffic-calming installation on Frankstown Avenue in Larimer

“We only introduced neighborhood traffic calming in 2018 or 2019,” says Ricks. “The program is a victim of its own success, and we have too many applications to handle. We can’t get to them all at the moment.”

Pedestrian and cycling crash fatalities disportionately affect Black and Brown communities, both locally and nationally. Road medians with plastic, reflective bollards on Frankstown Avenue in Larimer is an example of where DOMI has been able install traffic-calming to serve one of the city’s Black neighborhoods.

“We are trying to see the unseen places,” says Ricks. “They are more transit dependent and more walking dependent. We can’t just wait for them to reach out to provide these fixes.”