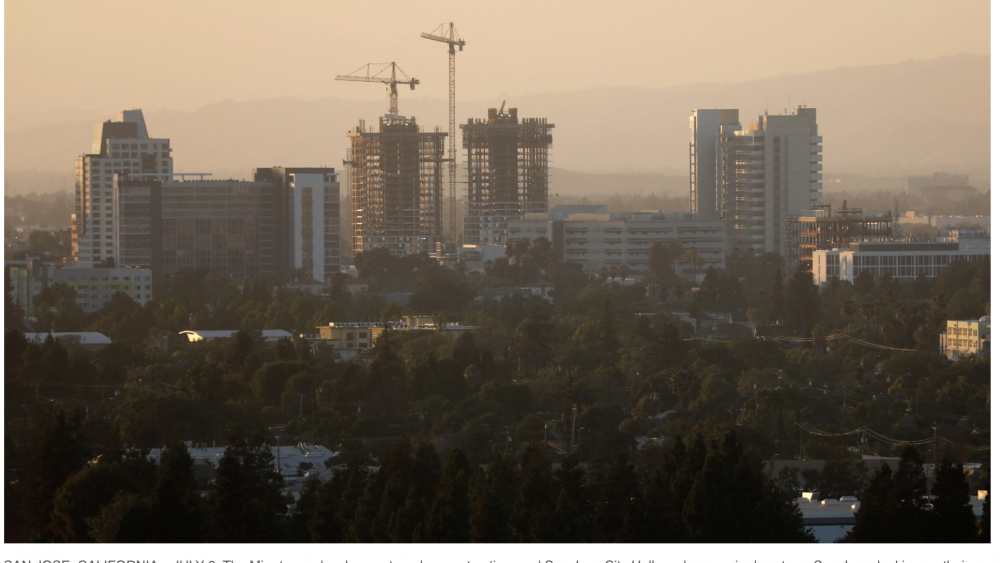 San Jose leaders embarked on a mission nearly a decade ago to transform the nation’s 10th largest city into a network of vibrant villages where people could live, work, shop, bike and play all within blocks of each other.

Single-story strip malls and stand-alone shops and restaurants would be replaced with tall buildings that combine housing, retail shops and offices, a growth strategy that makes the most of the city’s limited available space.

These “urban villages,” as planners call them, have been embraced by cities like Seattle and Portland and those closer to home. Santa Clara Square — a mixed-use community perched along U.S. 101 in Santa Clara, has attracted high-profile tech and retail tenants and created new homes for hundreds of residents — and Fruitvale Village — one of the Bay Area’s early transit villages, built in 2003 near the Fruitvale BART station in Oakland — combines locally-owned retail shops, community organizations and dozens of apartments.

In addition to reinvigorating underused or neglected pockets of land, officials wanted San Jose’s villages to reduce greenhouse gas emissions and help attract young workers seeking an urban experience by placing them around retail hubs like Santana Row or transit lines like the Berryessa BART station, which recently received approval for construction of 6,516 housing units and 6.6 million square feet of commercial office.

But nearly 10 years after San Jose officials ambitiously identified 60 locations for such villages, only 13 blueprints have been approved. Critics say a host of rules that govern the process of creating an urban village — particularly those that state any housing construction must be accompanied by job-producing commercial space and limit when and where they can occur — are actually driving developers to other parts of the city.

In fact, city statistics show that just over 35% of all new residential projects built in the past decade — when the village strategy was baked into San Jose’s general plan — have gone up within those designated areas. And with the majority of San Jose’s new residential and office projects springing up elsewhere, critics say the result is that the city is failing to meet its own housing and job production goals.

Because of its jobs shortage, San Jose for decades has seen a daily exodus of residents commuting to other cities for work. In an effort to halt that trend, the city in 2011 declared its intention to increase the jobs-to-employed-residents ratio from .85 to 1.1 by 2040. Ten years later, the ratio remains the same.

“There is no question that we have not succeeded in producing development in many urban villages at a rate needed to address our housing crisis,” Mayor Sam Liccardo said in a recent interview. “But that doesn’t mean that we can’t make changes to our urban village plan to make it successful.”

San Jose leaders later this year will consider changes to the urban village strategy along with contemplating other ways to boost both jobs and housing, including the elimination of traditional single-family zoning in large swaths of the city — an idea one council member calls a distraction from the problem at hand.

“The reality is we’re failing to address our housing crisis and our jobs deficit with the current general plan as implemented,” said Councilmember Matt Mahan, who wants city officials to focus on approving conceptual plans for all 60 designated urban villages.

‘Easier to do business elsewhere’

For any substantial development to occur in a designated urban village, the City Council must pass a master plan for the neighborhood. Such plans set a goal for the number of residential units and square footage of commercial space the area can accommodate while giving multiple would-be developers a vision for how the neighborhood should evolve.

In designated urban villages where a master plan has not yet been approved, affordable housing and commercial development are allowed but market-rate housing is barred unless it passes several tough restrictions and provides “more than its fair share” of commercial space.

Davide Vieira, a resident who lives in the city’s Roosevelt Park Urban Village area — one of the first villages approved in 2013 now undergoing construction of affordable housing — said he likes how it was planned to incorporate the public’s suggestions, including his to create dense housing and a new job center around the future 28th Street/Little Portugal BART station nearby.

“If more of these plans were in place, then people could build the kind of neighborhoods that the community members and the city of San Jose really want to see and live in,” he said.

A 2020 study by three Santa Clara University academics essentially found that San Jose’s urban village concept has done very little, if anything, to accelerate development or increase property values in the chosen areas. The urban planning advocacy organization SPUR made similar findings in a white paper published in November 2019.

“To put it simply, if San Jose had not adopted the urban village policy in 2011, we would probably have seen the same amount of development and the same distribution across the city,” said Michael Kevane, one of the Santa Clara University professors who conducted the study.

Some of the urban village plans have faced fierce opposition from nearby homeowners who fear the projects will encroach on their privacy and conflict with their community’s character.

However, even in areas where a plan has been embraced and approved like Little Portugal or Winchester Boulevard, the limited amount of development done so far has taken longer than expected. Brilliot largely blames construction costs for that.

But developers, housing advocates and some elected officials say the city is mostly at fault by making it a “burden” to pursue projects within many urban village areas.

“We’re actually driving development away from urban villages because in many cases it’s easier to do business elsewhere in the city,” said Michael Lane, SPUR’s state policy director. “It shouldn’t be that way.”