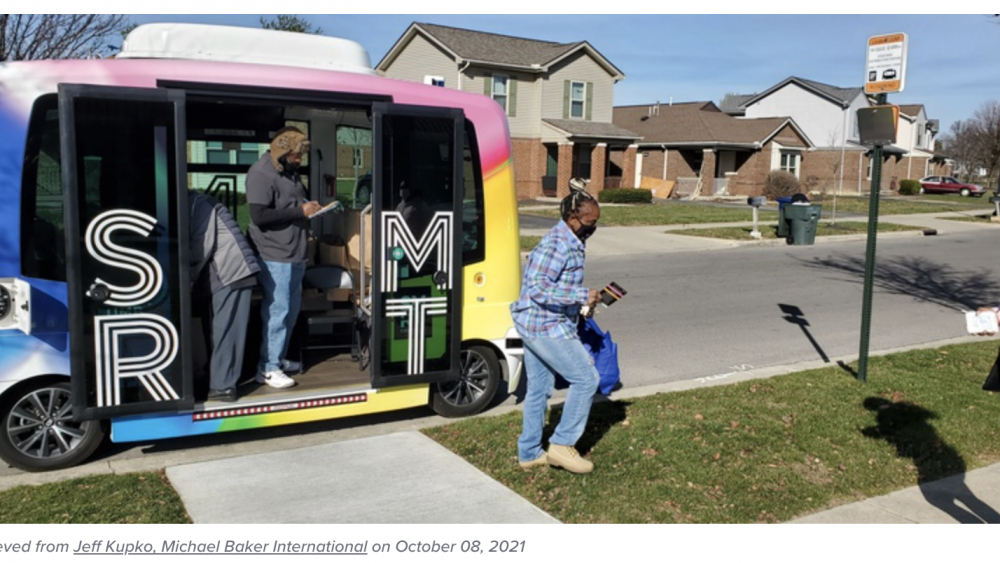 6 questions with Smart Columbus on lessons since program’s conclusion

Columbus, Ohio, wrapped up a federal grant-funded program earlier this year that allowed the city to roll out advanced smart technology, with a focus on helping its underrepresented communities.

The state capital beat out more than 70 other U.S. cities to win up to $50 million in public and private funds through the U.S. Department of Transportation’s (USDOT) Smart City Challenge grant in 2016. With an influx of additional support coming from a host of public and private institutions, Columbus implemented a sophisticated operating system that handled complex data analytics; connected vehicle technology; a prenatal trip assistance program; kiosks that help residents plan trips; autonomous shuttles; a trip-planning app called Pivot; and a parking payment app.

The city will continue using some of that technology and continue its efforts with a focus on improving mobility, sustainability and digitalization in the region by increasing electric vehicle adoption and expanding broadband to improve digital equity.

However, as ambitious as the city’s plans were, it did hit roadblocks due to challenges with implementing such advanced technology in the real world and the pandemic. Columbus decided to move forward with only nine of the original 15 projects that it had originally proposed after the first year. The city dropped its truck platooning project in 2019, technology that wirelessly connects two or more trucks while they are driving, and several others that had launched had low community engagement.

Smart Cities Dive interviewed Mandy K. Bishop, Columbus’ deputy director of public service and former Smart Columbus program manager, to reflect on the initiative’s challenges and successes, provide advice to other cities, and map out what’s next for the city.

The following interview has been edited for clarity and brevity.

SMART CITIES DIVE: What were some of the unexpected challenges the grant initiative faced in helping underserved communities?

MANDY BISHOP: The city of Columbus really does work very hard to understand our community. So we had very few unexpected challenges reaching our underserved communities. We knew there would be a level of distrust for deploying technology in the community so we anticipated that and we really worked to develop a liaison program and took a grasstops approach working with our area commissions and really embedding our communications project manager into the community.

One unexpected challenge that we did face for our prenatal trip assistance application was, I think we served 140-plus women in the project but we had difficulty recruiting. Some women we saw that didn’t have transportation, actually rid themselves of having transportation because they could get a ride from a friend or a family member.

One of the things we work really hard to do is making sure that we reach communities through multiple different media, including digital. But for our underserved communities, we also had to make sure that we had print material out, putting hangers on doors. It’s something we anticipated but we took extra time and resources to ensure we were reaching the communities that we needed to reach.

What benefits will residents and the city see going forward, both in the short and long term, as a result of the initiative?

They are going to see improvements in air quality. Our first finish line was completing the Vulcan program and we reduced greenhouse gas emissions estimated by about two and three-quarters percent. A small win there.

We still have many of our projects that are available and supported for the public like our Pivot application and our mobile parking application, the operating system.

We partnered with St. Stephen’s Community House to continue to provide food service, although it’s through a more traditional vehicle. But we established a need. And then some of the things that Smart Columbus continues to work on is leveraging some of the platforms that we built. Largely, we are really focused on getting more fleets to electrify.

We did a pretty good job at that during the grant work. We are also continuing to advance education around electric vehicle adoption. There’s a heavy focus on broadband and digitalization and right now, there are 25 families enrolled in a broadband pilot program with a target of 300 in the community.

According to the Smart Columbus Demonstration Program’s Final Report, only about 1,100 people downloaded the Pivot app, the autonomous shuttles paused service after a rider was injured, only eight trips were planned through the six Smart Mobility hubs, and the truck platooning project was canceled. However, city officials have still described the initiative as a success. Why is that?

You know, we’ve had a lot of conversations around this. When we won the Smart Cities Challenge, we didn’t just win money. We didn’t just win an award. But we really took on the job of proving out the readiness and effectiveness of emerging transportation technologies, with the purpose of improving people’s lives. We took this opportunity and pursued a leadership position into defining the future of cities, so we took a risk.

As you are aware, when you take risks in innovation endeavors, we knew some things would work and some things would not. But we would benefit from the learnings in our approaches to inform advancements across the city for years to come. We said we would fail fast and pivot and we did that and we learned from and specifically addressed the items that you highlighted.

When you think of the downloading of the Pivot application, we launched this during a pandemic. And so our original message of, ‘Everybody get on transit and get out there and download our app and use it as much as possible’ really couldn’t be deployed because we were really aligning our messaging with our state and local leadership which was, ‘essential trips only. Be safe.’ So we deemed that a success as we learned how to deploy this technology in that context.

As for autonomous vehicles, yes, we had a passenger slide off her seat when the vehicle behaved exactly as it should have. And so we learned some limitations of the technology that’s out there.

Government is inherently risk averse because we fear failure. But we have to iterate and innovate and be willing to take risks in order to best serve our residents.

What did the city learn about the integration of that technology in real-life and trying to navigate collaborations with the myriad of companies involved in the project? What challenges did it face and do you believe those challenges are insurmountable?

I’ll address the second part first. No, the challenges are not insurmountable. What we, as cities, have to learn is that businesses are in business to make money and there has to be a value proposition for them to engage in these types of projects and demonstrations.

And so we have to learn the personalities of each company and specifically, what their business model and their goals and what values they hold most dear. Most companies hold their client relationships most dear.

Is there anything the city would do differently if it had this opportunity again in the future?

We would have narrowed our focus from the time of application. One of the things we point out and we talk about in our final report is that we narrowed the program from 15 to eight projects. A portfolio of 15 projects with varying different types of technology is pretty robust.

That being said, we learned that having that focus was important and that really approaching the program from a holistic perspective and learning what works and doesn’t has been super beneficial to Columbus and our region.

What advice would you give to other cities looking to integrate these smart technologies?

I would 100% tell them to be very resident focused. Look at the problems that you are trying to solve in your community and engage with those individuals, not just at the beginning but throughout the process. It develops a level of trust, it helps you continually understand the program and learn new information and it also helps when you’re working toward adoption of the technology. You end up with a product that actually solves the user challenge at the end. And that’s what’s most important is that technology is often viewed as something people don’t understand or something that is bright and shiny, but we really leveraged technology to serve our residents.