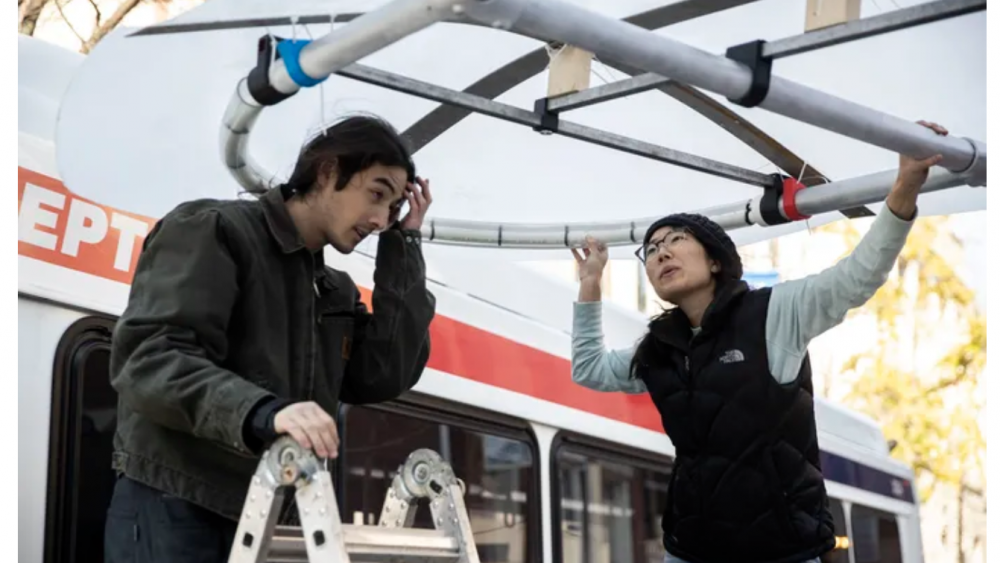 With muscle, power tools, and even a few cans of spray paint, three competing teams of young engineers and designers installed their prototypes Wednesday in the parking lane of South Second Street near Walnut.

They had worked for months to conceive and build efficient and elegant corrals that would reclaim unused patches of Philadelphia streetscape to chain up bikes while preventing parked cars from blocking access to fire hydrants.

After peppering the teams with questions, judges would select the best of the three as winner of the Rack ’Em Up Philly competition, which brings a $3,500 prize and, perhaps more precious, the chance to be pioneers of urban design.

“It’s been a fun brainteaser,” said Emma Fox, a marketing and business-development specialist at the Philadelphia office of Kimley-Horn, a planning and engineering consultancy.

Its team’s entry was built around bike racks shaped like pretzels, a nod to a Philly icon. (If Kimley-Horn wins, Fox said, the pretzels in the final design would be painted to look like the real thing, with flecks of salt and a dab of mustard.) White waist-high walls would shield cyclists locking up their rides and be visible to firefighters.

The design includes a mural on the street-facing side of the wall, hence the spray paint for purposes of the contest.

In Philadelphia, parking is barred in front of and within 15 feet on either side of a fire hydrant. Last year, the Philadelphia Parking Authority issued 31,380 tickets to violators.

“We’d rather not give out tickets but use the spot to protect the hydrants,” said Clarena Tolson, deputy executive director of PPA and a former city streets commissioner. And also, she said, to achieve another authority goal: give a growing number of cyclists safe places to park without clogging sidewalks or forcing them to lock their bikes on fences and other private property.

She said she got the inspiration for the project from Copenhagen on a study trip with other government officials run by 880 Cities, a foundation that promotes human-scale urban design.

“I was looking at how they treated the street and public spaces,” Tolson said. For one thing, people had been jumping off a high bank into the river to swim, where they often “got in trouble and had to be fished out.”

So Copenhagen cordoned off an area and built an approachable boardwalk with ladders and life preservers, Tolson said.

“They took a forbidding space and made it engaging,” she said. “That’s what we want to do.”

The contest was sponsored by the PPA, the city’s Office of Transportation, Infrastructure, & Sustainability (oTIS), the Delaware Valley Regional Planning Commission, the Philadelphia Fire Department, and the city’s Office of Emergency Management. The Philadelphia chapter of WTS, an organization that works to advance women in professional roles in transportation, recruited the sponsors and got the contest underway.

Patti Gibson, vice chair of WTS’s Rack ’Em Up committee, said the selection committee would confer and notify the winner by Monday.

Gibson said 17 teams initially entered the contest, five were short-listed, and three finalists were picked. There could be a tough choice ahead.

Besides the pretzel racks, there was “Harbor,” put together by a group of friends who studied together in the industrial-design master’s program at Thomas Jefferson University.

“We started our research by asking cyclists what their concerns were,” said Grace Choi, a member of the group who graduated in May. “A lot of it has to do with safety and security, so that’s what our concept is built around.”

The setup is designed so cyclists can use the space in front of the fire hydrant to stop and steer their bikes to the racks, made of steel tubing. Solar-powered lights in an overhead canopy would illuminate when users step inside, providing security, Choi said.

A team from AECOM — “Free the Wooder” — built a 4-by-6-foot modular rack, with stainless steel facing with a wave design, as well as stainless steel racks bolted into the floor of the structure, which is elevated and can be adjusted according to the varying heights of curbs and pavement.

“We didn’t want something you’d need a forklift to install or move,” said Doug Robbins, a senior planner for AECOM in Philadelphia. “We tried to emphasize flexibility.”

Robbins said his group did not find any cities that used fire hydrant zones for bike racks in its research, though it’s possible they missed a small project somewhere.

“It just makes sense to use a fire hydrant,” he said. “It’s an innovative idea.”