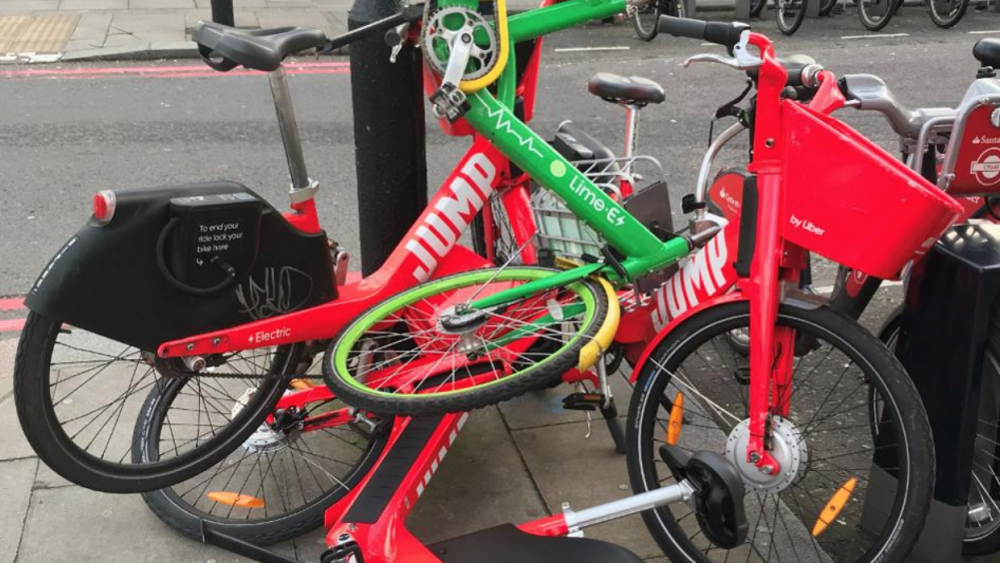 Videos circulating this week of Uber electric bikes being destroyed have infuriated people across the world.

The leaked videos show piles of the bright red bikes from Uber’s failed Jump shared eBike scheme being crushed and recycled, because the company has reportedly been unable to find a buyer for them after the scheme was shut down.

Uber last month sold its money-losing Jump scheme to shared eScooter company Lime, as part of Uber’s investment in Lime. In theory, their bikes are supposed to be painted green and transferred to Lime, which has already operated limited bike schemes in cities like Berlin. But Uber confirmed in a statement that it is “recycling” many of Jump’s older bikes and scooters after transferring “tens of thousands” of the newer models to Lime.

The videos have touched a nerve at a time when “micromobility” solutions are disappearing just when they’re needed most. As Coronavirus lockdowns end across the world, authorities are telling people to avoid public transport and travel outdoors as much as possible. The new eScooter and eBike sharing schemes that were launched in the year before the pandemic might have provided a perfect solution. But instead they were yanked off the streets at the beginning of the crisis, and many will never return.

Cities were already cracking down on shared eScooters last year, after complaints about them cluttering sidewalks and posing a danger to both riders and pedestrians. Some places banned the scooters entirely, while others limited the number of companies that could operate. Now, several places are rapidly trying to undo the restrictions they put in place last year and lure the scooter companies back. The U.K. has done a u-turn on scooters and is now investing on bringing them into cities.

Not all shared micromobility providers shut down during the lockdown. In Brussels, while the Jump bikes and eScooters were removed from the streets, local company Billy Bikes stayed open. But they are not relishing Jump’s demise.

“You would expect to see me cheering at the sight of these images,” Billy Bike founder Pierre de Schaetzen said in a post. “But quite frankly, I feel disgusted. As our company is raising funds to produce enough bikes to match the growing demand of our users, Uber decides to destroy tens of thousands of bicycles that haven’t even been on the streets for a full year. Besides the ecological disaster, the timing couldn’t be more insensitive, as bicycles have become the go-to mode of transportation in this post-corona world and worldwide supply is struggling to keep up.”

The sight of so many bikes and scooters being destroyed is particularly angering given Uber’s claims about its micromobility schemes being environmentally friendly. That claim was already being challenged because of the significant energy needed to construct, service and charge the bikes and scooters. Electric bikes cost at least $1,000 and use raw materials that are difficult to procure and recycle.

Others are criticising what they see in the video because the bikes could have been donated to charities. Lime is insisting that they are not the ones destroying the Jump bikes. But the cycling advocacy organisation Bike Share Museum says that 20,000 to 30,000 bikes are being scrapped, and that in reality Jump isn’t really passing to Lime but being totally scrapped.

“The JUMP bike is still dead – even if it exists for now, in certain markets – while Lime is going to be left trying to figure out how to plug the wires back together,” they say. “We can’t emphasize enough how disgusting it is for UBER to scrap 20,000 bicycles in the midst of an unprecedented pandemic where bicycles have literally become an object of survival. Heavy as they are, these could be transportation for the many who have been brought to financial ruin during COVID-19.”