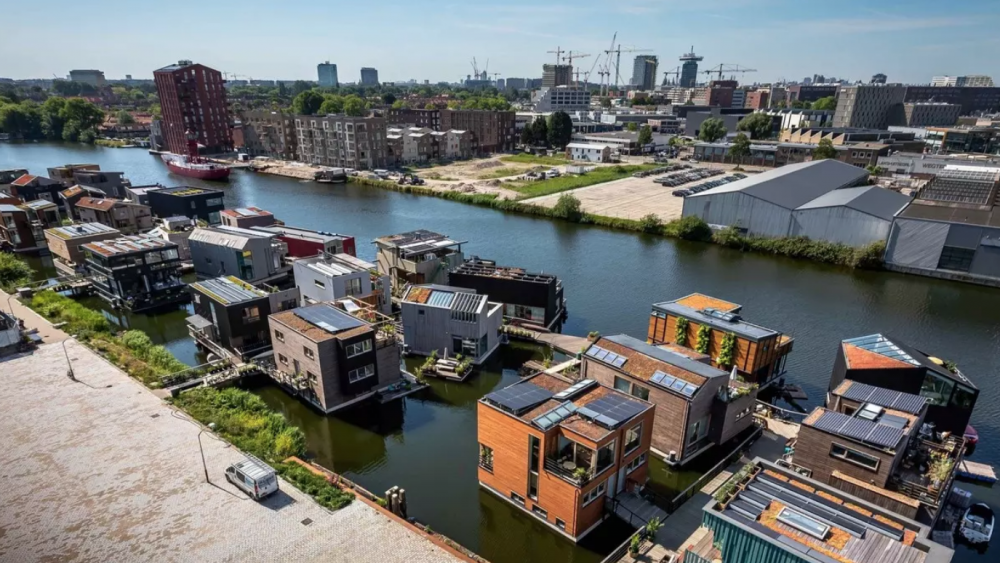 Amsterdam’s floating neighbourhood of Schoonschip is home to 105 residents who live in 46 homes on 30 water plots. Image: Schoonschip/Isabel Nabuurs

With cities running out of space and rising sea levels predicted to put 800 million city dwellers at risk by 2050, more of us may have to get used to living on water.

One nation adapting to this challenge is the Netherlands, where more than a quarter of the country already lies below sea level.

“Since urban areas struggle with high density, we should make better use of the space on the water,” says one of the architects, Space&Matter.

“With Schoonschip we want to set the example, and show how living on water can be a great and better alternative for people and our planet.”

The project is small in size – just more than 100 residents live in 46 homes on 30 arks floating – but it’s also designed to be mainly self-sufficient, with minimal impact on nature.

Solar panels and heat pumps provide heating. Wastewater from toilets and showers will in the near future be converted back into energy, and all dwellings have a green roof.

Floating communities aren’t new – they’ve been around for generations in some parts of the world. Examples include the Uros people, who live on floating reed islands in Lake Titicaca, Peru, and the Bajau people of Southeast Asia, who live on small houseboats off the coasts of Indonesia, Malaysia and the Philippines.

In more recent times, interest in water living has grown as the world seeks solutions to the twin pressures of population density and climate change causing sea levels to rise.

These sit on a floating pontoon structure that rises with the water level to keep the home safe in the event of a tidal surge or flooding.

“With a growing global population and an increase of people living in cities, high land values are causing a shortage of affordable housing in urban areas,” the designers say.

While in Denmark, end-of-life shipping containers have been used to create floating student accommodation in a design by architect firm Urban Rigger.

More than 570 low-lying coastal cities will be threatened by sea level rises of at least half a metre, by 2050, according to C40 Cities, a network dedicated to finding climate change solutions.

But the problem extends far beyond cities, to island nations, including Kiribati in the Pacific, where 81% of households had been affected by sea level rise in the decade between 2006 and 2016. Here, migration is considered the main solution.

As people move to cities to live and work, almost 70% of the world’s population is expected to be living in urban areas by 2050, up from 55% currently.

Many cities are looking underground to find more space. For example, Finland’s capital Helsinki has created a host of underground facilities including sports venues and an emergency shelter, while Montreal in Canada has an ‘underground city’ including shops and hotels beneath its streets.

UN-Habitat, the United Nations programme for human settlements and sustainable urban development, estimates that by 2030, three billion people, about 40% of the world’s population, will need access to adequate housing. This translates into a demand for 96,000 new affordable and accessible housing units every day.

Building homes on the water and underground could be part of the solution.